Every developer has an "origin story", the story of how they got into this crazy career. I'm always interested in hearing how people find their way into software development as it tells me a little about where their passions lie. Did you come from an artistic side? Did you come from the business realm? Have you been programming since you could type? Here's my origin story.

I drew a lot in class starting in 2nd or 3rd grade. I drew when I was bored plus I got compliments as I got better at it. Getting compliments only fed my desire to draw more. My favorite thing to draw was comic book characters, especially Ninja Turtles. I even made my own Ninja Turtle comic books: 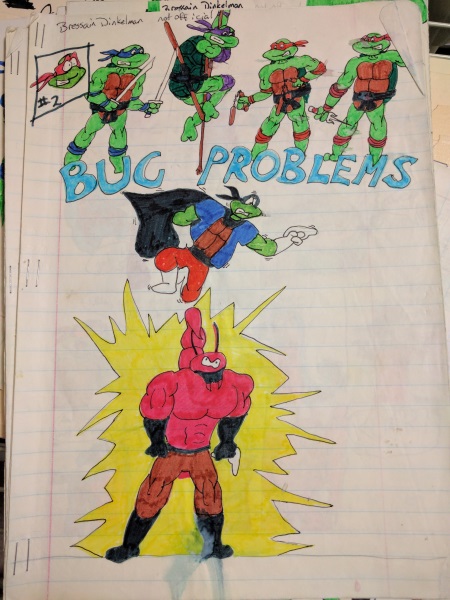 Sort of shocked that I still have these.

I kept drawing throughout high school and hung out with the art kids. I wasn't an artistic genius but I could hold my own with the other students. But like with anything, if you don't practice, you don't progress, and during college I doubled down on something else and my drawing skills stagnated.

For The Love Of The Games #

My dad bought a computer for the family when I was younger. It was a 66 MHz 486 IBM clone with 2 MB of RAM with Windows 3.1. Windows was great and all but if you wanted to play games, it was DOS all the way. My uncle put the computer together for us and included a bunch of games that my siblings and I could play (mostly demos and shareware).

When Doom came out, I was upset because our computer couldn't run it (not enough RAM). After playing around with some computer settings (remember autoexec.bat and config.sys?) and game settings, I was able to get it running at a resolution that was near unplayable but it worked!

As new games came out for PC, I became driven to figure out how to get them working on my dad's aging computer (he didn't care about being on the bleeding edge as he only cared about word processing). This led to saving up to upgrade the RAM, motherboard, video card, processor, and getting Windows 95 working (aw yeah, Diablo and Starcraft).

All of this was in the name of gaming but I learned to enjoy the problem-solving process. I also familiarized myself with file systems and gained confidence with breaking and fixing the computer.

In high school, I took a class that taught how to use office applications but ended with teaching HTML. Oh man, I loved having the ability to manipulate web pages! I created a few simple pages for the high school web site and I was even able to score a web monkey job working for the school district writing HTML. This was my first taste of programming.

After graduating from high school, I started at a 2-year college. I was pretty good at drawing, and playing around with computers was fun, so the obvious choice for me was to go into graphic art.

While I enjoyed the art theory classes and learning how to use Photoshop, it became obvious to me that while I was good at what I was doing, I wasn't amazing at it. I definitely had a creative streak but I enjoyed the computer side of things much more.

During all of this a few of my uncles were making good money programming (this is circa 1998, the height of the dotcom bubble). After talking to them, I decided that I would drop graphic art and pursue programming. Since my 2-year college didn't offer a programming focus, that pursuit would have to wait and I switched to a general education focus to prepare for a 4 year university.

It Hurt So Good #

Computer Science was an eye-opener for me. It was: So. Very. Hard. Really all I wanted to do was make web sites but turns out there was a lot more to web sites than HTML.

The weed-out classes were in Scheme & Java. Later on in life I would realize how great it was to have my intro classes in both functional and object-oriented languages. I had recursion down after that first class.

As I progressed through these classes I realized something: while the classes absolutely wrecked me, I enjoyed every minute. The problem-solving, the creativity, the exactness, it all spoke to me and I loved it. I could see myself doing this for a living and enjoying it.

I eventually finished my Bachelor's in Computer Science and started my career in programming but that's a story for another day. What's your origin story? Does any of this feel familiar to you? Thanks for reading.