I think it's time for a very nitpicky rant about how to use Slack, specifically the "reaction" feature.

I've been a long-time user of Slack. When I was introduced to it back in 2014 I thought it was a great tool and was thrilled when my current company switched to it as our primary form of communication (highly recommended btw). As Slack became popular, they introduced the ability to "react" to posts. This seemed like a natural step as previously, people would post something, and then you'd have a ton of messages following that were just emojis. But I've noticed an annoying trend: 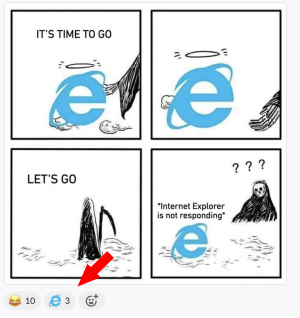 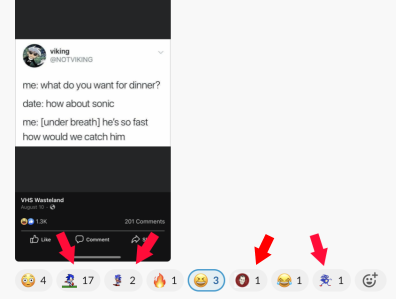 In the first image, you have a meme about IE. Several people reacted with a laughing or "joy" emoji. It made them laugh, react with laughing. Makes sense. And then you get a reaction of the IE logo. I mean yeah, you're right, it's about IE.

Then the second image: a few laughing emojis, flushed emoji, and fire (because it's lit?). Once again, makes sense. But then you have these other reactions, one that represents "dad joke" (which yeah, it's a fine one at that), and several of Sonic the Hedgehog which once again, yep, it's about Sonic the Hedgehog (let's not get into why my company has multiple Sonic Slack emoji).

Which brings me to my point: Slack reactions are not pattern-matching tests.

If it post or message made you laugh, use a laughing emoji (there are several, go nuts). If it made you sad, use sad or crying emojis. People don't care that you were able to recognize that there is water in a picture of a beach and so you react with :ocean:. Everybody can see that as well. What people do care about is how that post made you feel. So really that's my call to action here: react with how the post or message made you feel.

Thank you for bearing with me here through my rant; told you it would be very nitpicky 😉.